One of the most important, but often underrated, items of business we conduct at our state convention is the election of the executive committee. At the 2017 Libertarian Party of North Carolina State Convention in Lake Lure Aug. 11-13 we’ll be electing the entire membership of the Executive Committee.

If you are interested in serving in any of these positions, contact Matt Clements, chair of the nominating committee, at mclements@lpnc.org.

The exec comm is responsible for the control and management of all of the affairs, properties, and funds of the party consistent with the bylaws and any resolutions that may have been adopted by the state convention.

The committee meets about six times a year in person. They also hold online meetings and conduct other business online between meetings. The duties of the officers are outlined in the bylaws here. EC members must be LPNC members, as defined in the bylaws (Article III) and must be registered to vote as Libertarian or unaffiliated.

Current officers are listed here. Please email any of them or state chair Brian Irving, if you have any questions.

In the years following 9/11, North Carolina was used as a staging ground to launch flights that picked up suspected terrorists abroad and transported them to CIA "black sites" and third-party countries where they were illegally detained and tortured.

The North Carolina Commission of Inquiry on Torture is a non-profit organization dedicated to investigating and establishing public accountability for the role that North Carolina's government and state resources played in helping to facilitate the U.S. torture program.

The Libertarian Party of North Carolina has launched a new campaign to support Craft Freedom, an association bringing awareness to regulatory issues affecting the growth of the craft brewing industry.

Craft beer brewers in North Carolina face a dilemma: limit the success and growth of their operations, the number of consumers who could discover and enjoy their product, the jobs they could create and the local economies they could benefit, or -- turn an important part of their operations over to a third party who has no real interest in the success of any individual brewer’s brand.

Stymied by this 1930’s-era state regulation, three NC breweries face that decision. Dozens more don't attempt serious growth because they know they will be put in the same, losing position.

Proposed state legislation will raise the production threshold fourfold before forcing brewers into this decision. It's a reasonable first step in allowing a dynamic and important local industry room to grow.

Here's how you can support craft freedom and the LPNC. 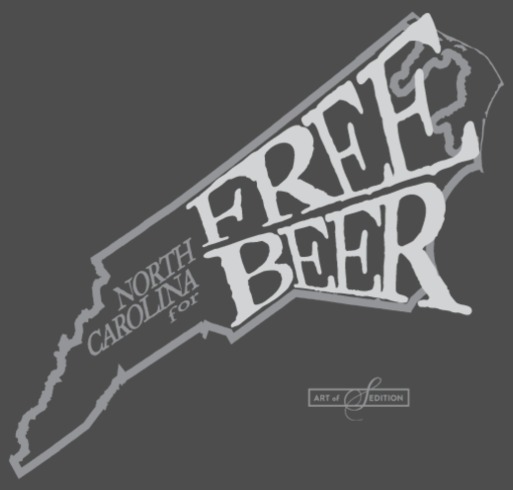 * Order your T-shirt here. We need 50 orders to trigger the first edition printing, so please share this link far and wide.

* Call your state representative to voice your support. Click to find out who represents you.

* And show your support by proudly wearing our North Carolina for Free Beer T-shirt whenever you go to your favorite watering hole.

Read more about this issue:

Charlotte Brewers Want to Expand. But a Big Campaign Donor Stands in their Way (Charlotte Observer)

“As libertarians, we condemn our own government's interference in Cuba's domestic affairs,” said James Hines, an at-large member of the party’s executive committee.

Cubans had a right to revolt against the dictator Fulgencio Batista, who overthrew a democratic government in 1952 coup d’etat, Hines said.

“Even more,” he added, “we mourn for the Cuban people because Fidel Castro, the man they trusted to lead the resistance against Batista, and his brother Raul, have proven far more brutal tyrants than the dictator they replaced.”