Casteen Goes 'On the Record' With WRAL

Two of the three candidates for North Carolina's 7th Congressional District appeared together "On the Record," the WRAL TV News program hosted by David Crabtree. Democrat Jonathan Barfield Jr. and Libertarian J. Wesley Casteen were in the studio for the program, which aired Oct. 25.

UPDATE: Republican David Rouzer declined to appear on the show with the other two candidates.

Casteen was invited to participate in the program Oct. 20 following his performance at the Oct. 16 debate sponsored by the Greater Smithfield-Selma Area Chamber of Commerce in which all three candidates appeared on stage together.

Sean Haugh won't be producing yard signs for his U.S. Senate campaign because he's environmentally friendly, and thinks they're just roadside litter. But supporters can create their own DIY sign by downloading a hi res PDF file here and printing their own. 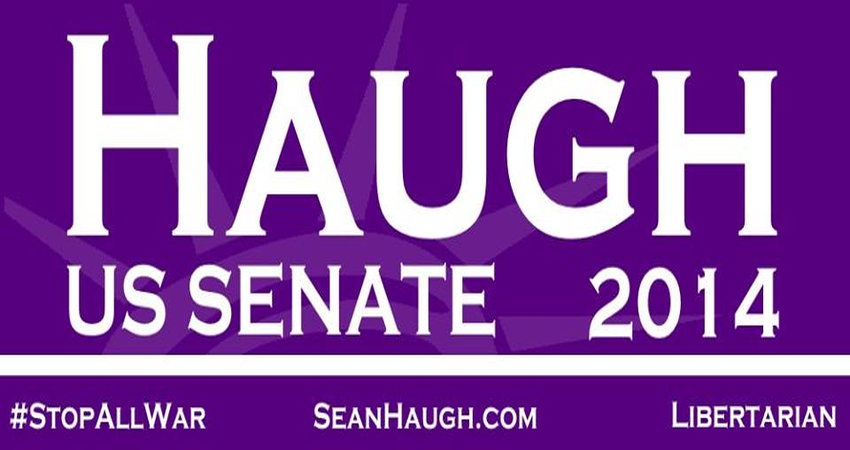 Vote Libertarian Early, or on Nov. 4

Early voting starts today and ends Nov. 1. Election Day is 10 days away, Nov. 4.  If you're fortune enough to live in a district where there's a local Libertarian candidate, please vote Libertarian. And everyone in North Carolina can vote for Sean Haugh for U.S. Senate.

In races where there is no Libertarian candidate, there are several resources you can consult to help you make an informed decision.

In addition, there are many judicial candidates on the November 4 ballot, including 19 people running for the state Court of Appeals. These are supposed to be nonpartisan races, and the Libertarian Party of North Carolina does not recommend or endorse judicial candidates. There are also guides available to help you in these decisions as well.

There was supposed to be a U.S. Senate candidates debate last night on the Time-Warner Cable News show “Capital Tonight.” But it turned into an hour-long “conversation” with only one candidate, Republican Thom Tillis, speaker of the state House. Democrat Kay Hagan, the incumbent, declined to participate, and Libertarian Sean Haugh wasn't invited.

The debate was organized by TWC, the News and Observer, and the Charlotte Observer. However, when TWC Cable decided to place an empty chair to represent Hagan's absence, the two newspapers refused to have their reporters take part in the questioning. So it was left to TWC's Tim Boyum and Loretta Boniti to ask the questions.

Haugh was not invited to participate because he failed to met the 15 percent polling threshold set by the organizers. However, Haugh watched the debate in the studio, and TWC aired his five-minute response after the program.