The 2019 Libertarian Party of North Carolina Convention took place over the May 31 - June 2 weekend at UNCW in Wilmington. Most delegates took the opportunity to lodge at the University housing (Belk Hall), where traditional Friday evening festivities took place.

On Saturday morning, delegates breakfasted, registered, and settled into Warwick Center to begin the first business session of the Convention. 59 delegates were credentialed. The meeting officials were: Chair Susan Hogarth, Vice Chair Brent DeRidder, Convention Secretary Reid Deal, and Parliamentarian John Underwood. After a brief address from the Chair the Bylaws Report was reviewed by the Body, with the report delivered by Brian Irving. All of the changes to the Bylaws and Convention Rules proposed by the Bylaws Committee were passed.

The Bylaws work proceeded so efficiently that, after the conclusion of the Saturday business session, the Body was able to invite both of our Special Congressional Election candidates, Tim Harris (CD3) and Jeff Scott (CD9) to speak briefly and answer questions about their campaigns.

Vice Chair Brent DeRidder, who Chaired the Strategic Planning Committee, unveiled the completed draft Strategic Plan (to be adopted by the new Executive Committee). The Plan focuses on strengthening the foundation of the LPNC and using the newly-adopted organizational structure to grow the Party.

Adam 'Ace' Fogerson from the CloudCoin Consortium, as the sponsor of our Saturday lunch, treated the body to a brief presentation before we broke for lunch. During lunch, we had an excellent talk on reforming healthcare by Dr. Steven Feldman of the Wake Forest School of Medicine and creator of the www.DrScore.com doctor rating/patient satisfaction website.

After lunch, members and guests were treated to several breakout sessions, including one from our keynote speaker Mary Ruwart on effecting political change without getting elected, one from NORML representative Zac Lentz on advocating for freedom, and one from the LPNC's media relations officer Jim Doughty on press relations (full video of that talk can be found here). In addition to the breakout sessions, we had tables from NC NORML, the LP Radical Caucus, Mary Ruwart, the CloudCoin Consortium, the Kim Ruff for President campaign, and the LPNC itself at which to browse. As a special treat and effective fundraiser, Roger Kohn volunteered to organize and man a 'yard sale' table, where donated Libertarian and other items of interest were for sale at a modest price. 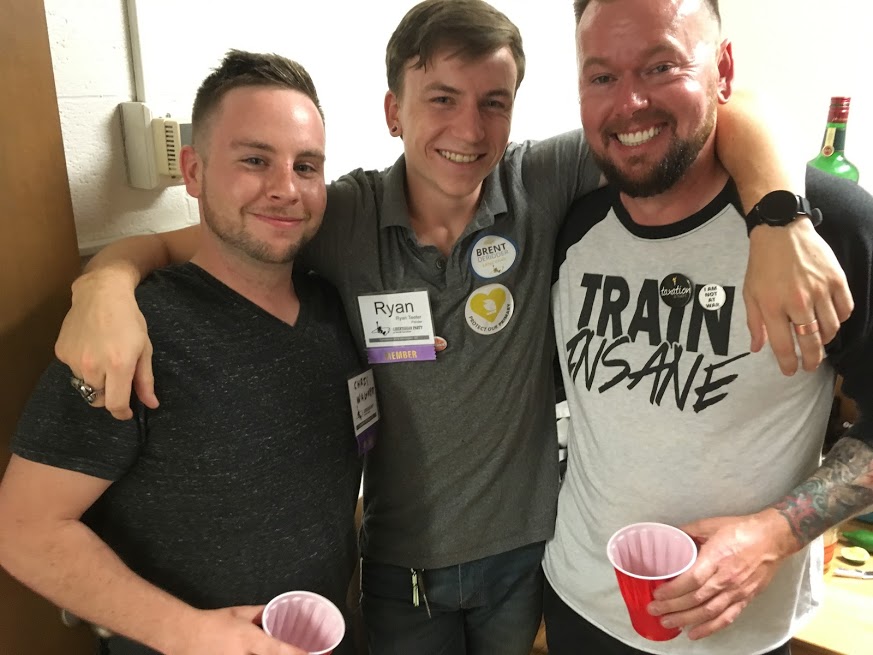 Late Saturday afternoon was set aside for a special non-business session to allow members to debate and discuss a motion on Sunday's schedule to move the Libertarian primary from semi-open (open to Unaffiliated and Libertarian voters) to only registered Libertarian voters. This proved to be a lively and passionate discussion lasting well over an hour, allowing delegates to hear many different viewpoints and arguments on each side of the question.

After a break, delegates and guests gathered for dinner, where we were treated to a special address (sponsored by Barbara and Tom Howe) from Dr. Mary Ruwart, research scientist, ethicist, and libertarian author/activist. After dinner, we had a bit of a Libertarian history lesson in the form of a trivia contest (which also served as a fundraiser), then retired for more informal socializing until late in the evening. 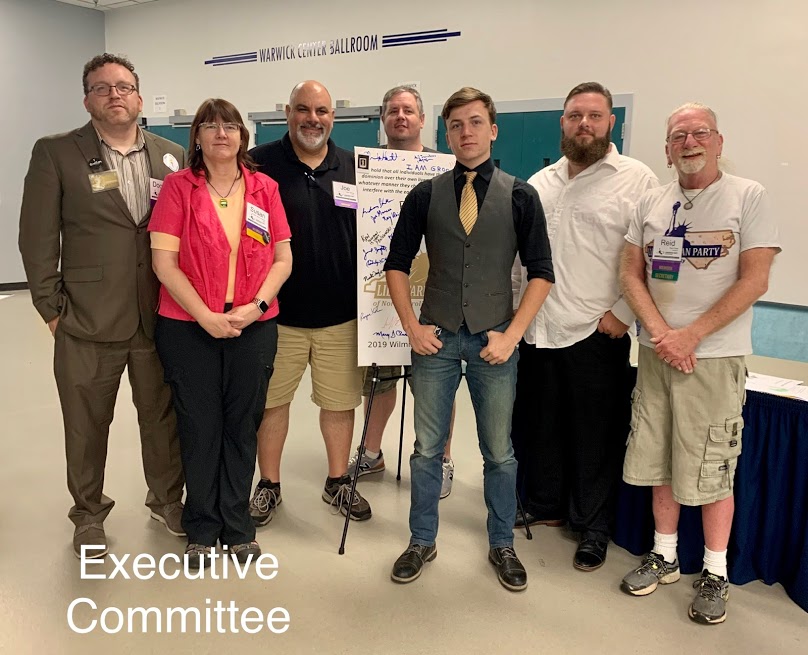 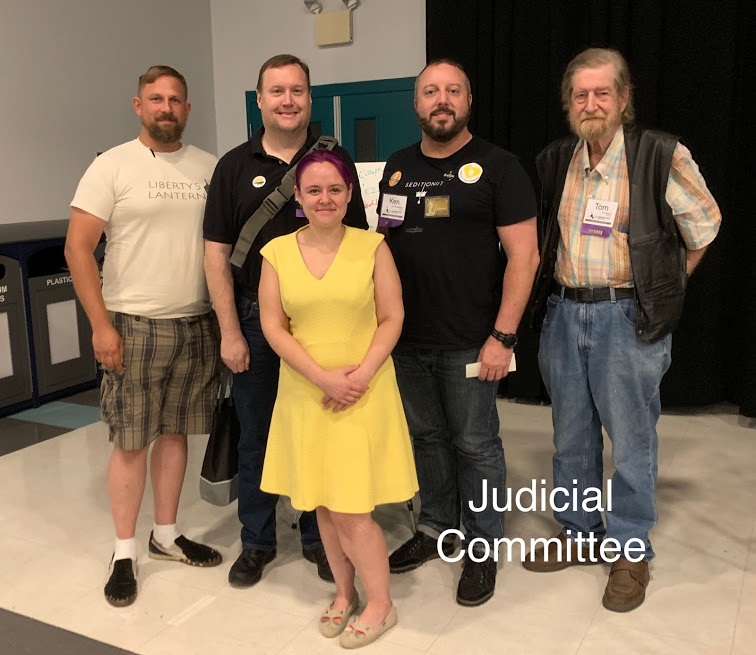 On Sunday morning, after breakfast, we reconvened for the election of the new Executive Committee. Susan Hogarth was re-elected as Chair, with Brent DeRidder being confirmed in the role of Vice Chair, which he had been filling for most of the previous term. Reid Deal was selected as Secretary. Due to changes in the Bylaws that were adopted on Saturday, we did not elect a Treasurer (the new EC later reappointed Barbara Howe as Treasurer). The same changes also reduced the number of at-large delegates from nine to four. Selected were Christopher Cash-Dooley, Ryan Teeter, Joe Garcia, and Timothy Conard. A Judicial Committee was also selected, consisting of Kenneth Penkowski (Chair), Sarah Brady Wagner, Erik Raudsep, Tom Bailey, and John Underwood.

During the votes/tallies, we heard from Jacob Hornberger, President of the Future of Freedom Foundation, and from Joseph Bishop-Henchman, at-large representative to the Libertarian National Committee and Executive Vice President of the Tax Foundation.

After the elections, we decided the following items:

The Convention adjourned at 11:40 Sunday morning, followed by meetings of the Judicial Committee and the Executive Committee. 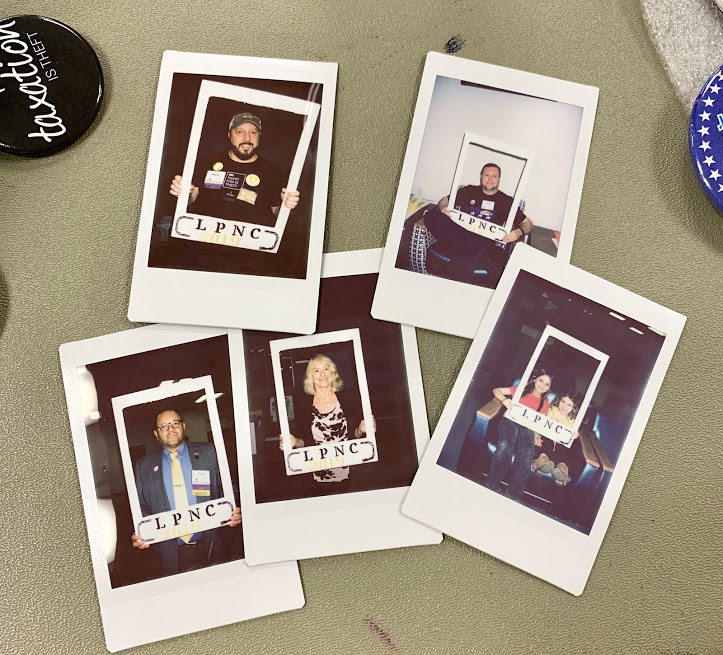 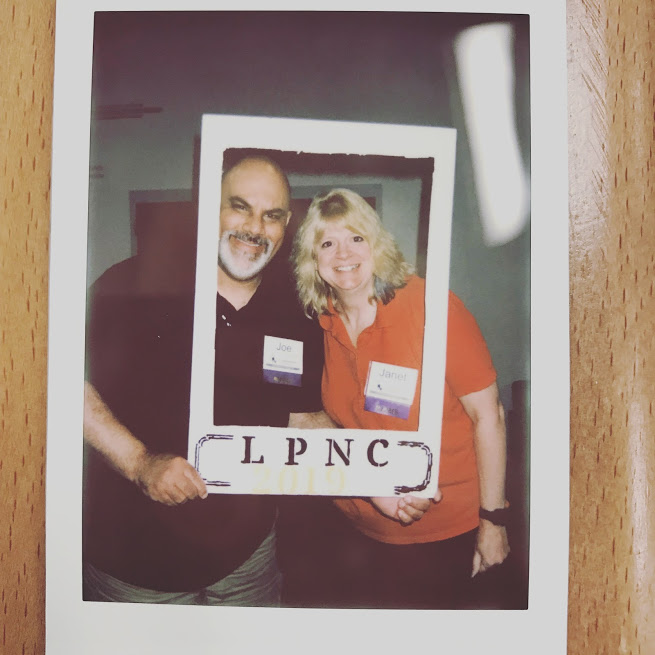