The Libertarian and Green parties, along with their respective 2012 presidential candidates, Gov. Gary Johnson and Jill Stein, filed a lawsuit in federal court in Washington, D.C. today, charging that the exclusion of qualified candidates from the general election presidential debates by the Commission on Presidential Debates violates federal anti-trust laws. 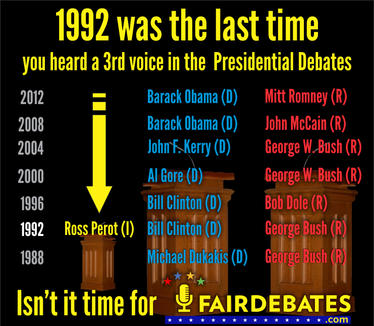 The legal challenge maintains that the Commission on Presidential Debates, a private 501(c)3 organization created in 1987 by the Republican and Democratic national parties, intentionally limits participation in the nationally-televised debates to the Democrat and Republican nominees — placing other national parties’ nominees at an unfair disadvantage.

Other candidates are excluded by the Commission’s imposing of arbitrary polling criteria and its colluding with the two old parties to refuse participation in any nationally-televised debates or in Democratic and Republican nominees’ joint appearances not sponsored by the CPD.