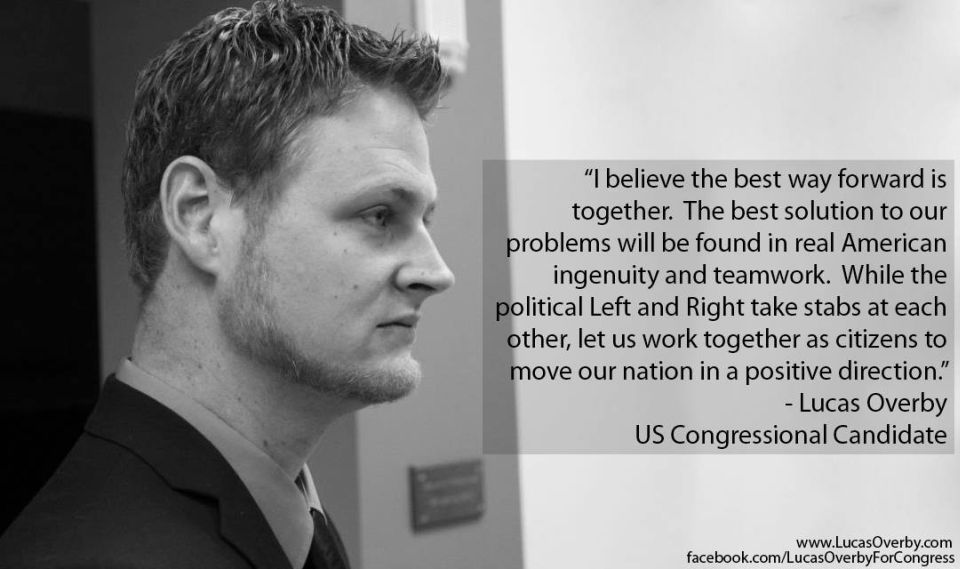 Lucas Overby became the first Libertarian candidate for Congress to participate in a nationally televised debate with his Republican and Democratic opponents Feb. 1. He is running for Florida’s 13th Congressional District. Republican Bill Young held the seat for 43 years, until his death last year.

The March 11 special election has been getting it’s fair share of national press and it is clear the duopolists are taking it seriously. The GOP convinced David Jolly, a former aide to Rep. Young , to put a seven-figure income as a lobbyist on the back burner to run.

The Democrats nominated Alex Sink, an even higher-profile candidate (and Mt. Airy native). She worked for Bank of America and was elected as Florida’s Chief Financial Officer before losing a competitive race for governor to Rick Scott in 2010. Sink is renting property in the district in order to be eligible to run.

The latest published poll put Overby at 5.6 percent, up from 4 percent in previous polls. This puts him well ahead of what Gary Johnson polled in the district in 2012.

“We are confident he would poll higher now with all of the door-to-door outreach his team has done, weekly town hall events, media attention and inclusion in the debate,” said Danielle Alexandre, treasurer of the Libertarian Party of Florida. “He has also been invited to participate in every candidate forum that his major party challengers have been invited to except for some private events by partisan clubs.”

Alexandre said the Democrat and Republican candidates have been on a canceling spree since the last candidate forum in which Overby won over a large portion of the crowd.

“It’s exciting to see the two major parties running scared of our candidate,” she added. Meanwhile, the other two candidates are in a dead heat.

With the debate behind them, Overby’s strategy now is to contact absentee voters, who are very likely to vote, and especially important in special elections which feature low turnouts. According to Field Coordinator Karena Morrison, the campaign focus is on personally reaching as many absentee voters as possible and inspiring them to consider Lucas Overby as their candidate to represent their family.

“We’re getting amazing feedback from our field efforts,” said Morrison. “Volunteer help on the phones would be greatly appreciated and will allow our local team to spend more time walking the targeted neighborhoods in district.”

She said that elections in this district are won and lost in the absentee voting, and so the Overby campaign has put together a targeted list from the latest information of voters who will be receiving a ballot in the mail at the end of this week.

“Which is where we come in: we can help make history here,” said Brad Hessel, Executive Director of the Libertarian Party of North Carolina. “If you can volunteer, contact Morrision at: [email protected] or 1-727-518-4659. She will provide you with access to a list of voters to call, a script, and detailed instructions explaining what the objectives are, how to handle various scenarios you may encounter, and how to report your results.

“If you can spare some time, seize this opportunity to make a difference in a key race with national visibility,” said Hessel. ”A breakthrough performance by a strong Libertarian candidate anywhere will help us everywhere.

“It’ll be fun.,” he said. ”And, besides, you can use the practice to get ready to work for our own North Carolina candidates this fall.”