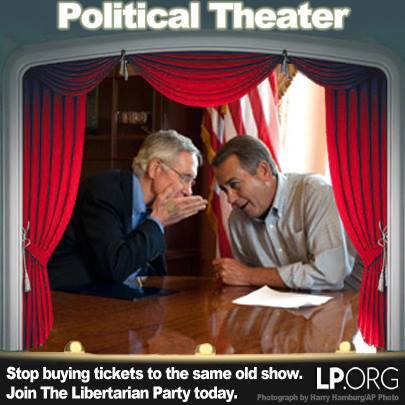 The overwhelming majorities of  Democrats and Republicans who passed one more government debt and spending hike proves that they are incurable and can never be convinced to do the right thing, Libertarian Party political director Carla Howell said in a statement today.

“Republicans who control the U.S. House, and who therefore control the purse strings of the federal government, sold Americans down the river — their job prospects, their kids’ future, the security of seniors, and everyone’s vital health,"  she said.

While Republicans made concession after concession, and supported the pretense of a government shutdown, Democrats "were cheerleading for higher spending all the while," she said.

“Republicans caved on the government slowdown, falsely pegged as a ‘shutdown,’ bowing to political gamesmanship and media propaganda.

“They supported the pretense that furloughing overpaid and unnecessary government workers — most of whom should be freed from their meaningless, wasteful, bureaucratic government jobs and encouraged to find productive, satisfying jobs in the private sector — was some kind of tragedy."

“Elected Democrats and Republicans are incurable," she said.  "They cannot be lobbied or begged to do the right thing. Only by voting for their opposition candidates — who are firmly committed to dramatically and immediately cutting federal government spending — will anything change."

Read the full statement at LP.org.