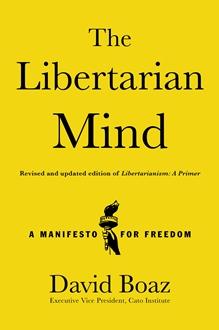 The Libertarian Mind is a new book by David Boaz, the Cato Institute’s long-time executive vice president. It's a newly revised edition of his classic work, "Libertarianism: A Primer."

Boaz has updated the book with new information on the threat of government surveillance; the policies that led up to and stemmed from the 2008 financial crisis; corruption in Washington; and the unsustainable welfare state. The Libertarian Mind is the ultimate resource for the current, burgeoning libertarian movement.

As John Mackey, co-founder of Whole Foods, puts it, "Boaz’s message is both timeless and extraordinarily relevant to the challenges that we are facing today."

Boaz has played a key role in the development of the Cato Institute and the libertarian movement.

"I think the general idea of 'it's your life you get to run it the way you want to' is an appealing aspect of libertarianism," says Boaz.

Over the years, Boaz has been on the libertarian forefront fighting for drug decriminalization, educational choice, private property rights, and shrinking the growth of government.

The Libertarian Mind is available on the Cato bookstore, from Amazon and other sources.